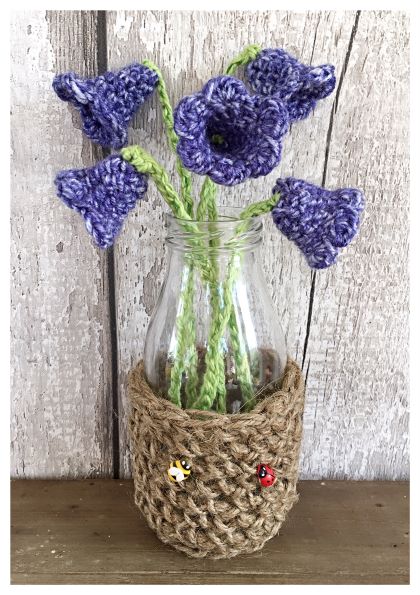 I don’t know about you, but I seem to have all my weird and wonderful ideas in the middle of the night.  I often wake up around 3am, and to get back to sleep, I start designing new crochet makes in my head.  Sometimes I design a whole new kit, sometimes I come up with a gift for someone for their birthday, and other times I come up with a wacky idea for a new workshop (like crazy cacti for example!)  In bed, at 3am one morning, the mystery crochet kits idea was born!  Let me take you back a bit.

I’d been having a few thoughts about some kind of ‘regular’ kit but I wasn’t keen on anything subscription based (too much pressure!) so I knew that wasn’t for me, and I was also keen to use up some of my stock that I’d bought to make into gifts for friends and family but had never got around to doing (the state of our spare room is a whole new story but that’s a blog for another day).  I came up with some ideas for kits that would use some bits that I already had, and was surprised to find that I had 6 of these.  ‘Six,’ I thought to myself, ‘that’s a new kit every other month!’

And that’s where the middle of the night business comes into it.  One night last summer, I woke up in the middle of the night and wondered how much fun it would be to design a crochet kit but not tell anyone what was in it or what it made.  Would people buy a crochet kit when they didn’t know what was in it?  Who knows, but I was only going to make 5 anyway so if it didn’t work then I hadn’t lost anything.  Turns out that 15 people wanted to make my first mystery crochet kit item, ‘Love is all around!’ (picture on my Facebook page). It ended up selling out in the first hour so I ended up buying extra stock so no one was disappointed! Not quite what I had planned when one of the reasons for making the kit was to use up excess stock!

I was pretty sure that this was a fluke and once people opened their mystery crochet kits, they would have decided it was a lot of fuss about nothing and that was the end of that.  But I was surprised to get some really good feedback!  So I started work on the next mystery crochet kits.  As the first month’s was themed, I decided to stick with this, as well as using some stock that I already had.  But I wasn’t going to get caught out this time, I ordered a little bit extra just in case a few other people wanted to share in the mystery making.

April came and I launched the second mystery kit, ‘If you go down to the woods today…’(picture on my Instagram page).  This time over 30 of you wanted a piece of the mystery crochet kits action;  I couldn’t have been happier with this – especially as they sold out completely over the weekend (with only a few of you just missing out).  I was so pleased to hear more lovely feedback on April’s mystery kit; there was something reassuring that not all my late night ideas were completely mad and wacky!  I’m now certain that I’m more excited about you receiving the kit than you are.

So, we’re now in June and I’m about to launch this month’s mystery crochet kits.  I’m sticking with the themed approach so I can reveal to you that there’s no Christmas trees or snowmen in this make; I’m hoping you’ll think it fits in perfectly with the season.  And yes, I’ve ordered extra stock again this time, so as long as you get in early, there shouldn’t be any disappointment (she says, crossing her fingers).

I wanted to end this blog by saying what I thought the best thing was about the mystery crochet kits but if I’m really honest, I can’t decide what it is.  Is it the fact that I absolutely love designing them and keeping them a secret, or maybe because I love the little messages you send me when you receive yours in the post, and I really love it when I give you the go ahead to share your pictures on social media. It’s a bit like when I used to do ‘show and tell’ as a primary teacher….only much better and much more interesting (I’ve lost count of the amount of children who used to bring stones in from off their driveway).

Anyway, I digress. The good news is that I’ve planned out the next few mystery crochet kits; the August and the Christmas ones are coming together nicely so it’s just October’s to go….I’m hoping that idea will come to me after lights out tonight.

Please see our events that are running in our calendar on our Events page. Hover over the events or click on them for more information and to book.